Note: This page under construction

These examples are part of the RiverSmart report Supporting New England Communities to Become River-Smart: Policies and Programs that can Help New England Towns Thrive Despite River Floods

Example 1: River Floods in New England, Past and Present 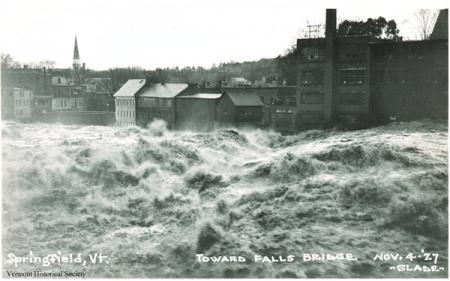 Because of New England’s ample rainfall and steep terrain, it has a long history of large, destructive river floods. Tropical Storm Irene in 2011 brought the worst floods many Vermonters had ever seen; but a few Vermonters, now in their 90s, remembered one that was worse. In 1927, after a particularly wet October, in early November a hurricane came up the Atlantic coast, stalled in Vermont’s mountains, and dropped six or more inches of rain over three days. As with Irene, rain that fell in steep river valleys accumulated quickly into raging torrential streams and rivers. Some 84 Vermonters died in the resulting floods across the state.  A decade later, southern and coastal New England experienced similar scales of river floods and devastation. The flood of 1936 remains the flood of record for much of the southern Connecticut River Valley, as well as other river valleys in western Massachusetts and Connecticut, while the flood of 1938 battered coastal communities in Connecticut, Massachusetts and Rhode Island. There were also major regional-scale river floods in New England in 1949-50, and 1955.

Regional-scale floods bring much-needed attention to the problems that can be caused by river floods. However, the media attention on large-scale extreme floods can obscure the fact that there are more localized floods in parts of New England every year, some that do considerable damage. One of the most damaging local events in recent years occurred along the Suncook River in New Hampshire, a tributary of the Merrimack. Following extreme rain in the state on May 15 and 16, 2006, the Suncook overflowed its banks and carved a new path, while nearly two miles of the old river channel was left dry. The river’s new route was shorter and steeper, so the water sped up, and carried and eroded more sand. In the weeks and months that followed, the channel cut down more than 10 feet, and stream bank after stream bank slid into the river. Three dozen homes have had to be purchased so home owners could move to safer locations, and the river is now down-cutting into its bed upstream in what is known as a migrating headcut; this has the potential to undermine the Route 4 highway bridge in the future.

Learning from our rivers' past and present

River floods are natural products of New England’s variability in weather and terrain, and they have made and remade our landscapes for millennia. Our fascination with extreme floods and extreme flood damage has too often led us to dam and armor rivers, resulting in growing complacency that we can count on their new stability. The damage caused by Irene in Vermont and western Massachusetts, and the problems caused by the Suncook’s sudden channel shift in New Hampshire, show that we have not – and cannot – build our way to total river stability. It is time to accept and understand river floods better, so we can live with rivers rather than pit ourselves against them. 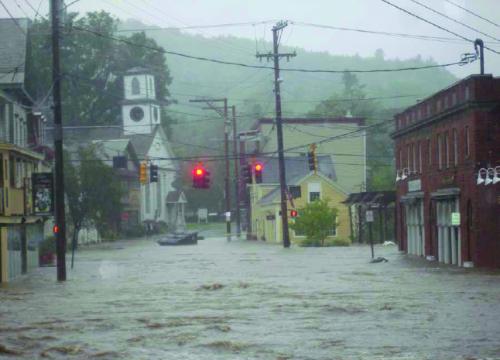 Downtown Wilmington, VT at the height of Tropical Strom Irene

The most common notion and image of floods is of rising water. Rising water causes inundation, or immersion in water. Many times, though, the most damaging aspect of river floods, and the one that takes people by the greatest surprise, is fluvial damage – either fluvial erosion or fluvial deposition. This is not caused by rising water, but by the power and force of moving water, sediment, and debris.

If the main threat of a flood is inundation, or rising water, the key variable that affects flood risk and damage is the elevation of lands, homes, and structures. Lower elevation areas are more likely to be inundated, like a bathtub might fill with rising water. The solution is to move structures to higher ground, to elevate homes and structures, and, where needed, build protective structures to keep out water.

However, there are many areas of higher elevation that may be safe from inundation, but are at great risk of fluvial erosion. This is because flood waters can undercut banks and hill slopes, causing small and large landslides. For example, this home along Vermont’s White River near Rochester was likely at high enough elevation that rising water never touched it, but the damage it suffered from the bank eroding beneath it is clear. Some areas that are at risk of inundation may also be at great risk of fluvial deposition (see photos pp. 9 and 10). 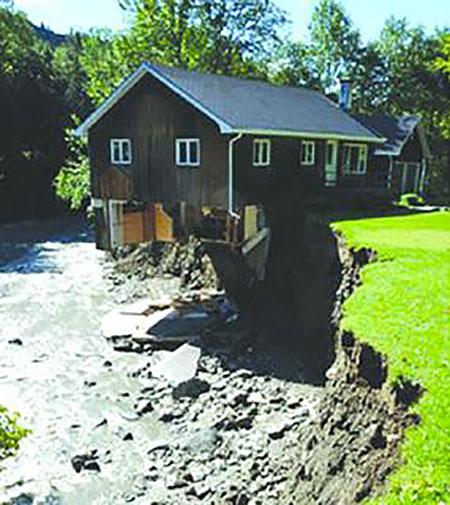 A house destroyed by Tropical Storm Irene hangs over Marshs Brook, a tributary of the White River in Rochester, VT

New England communities remain ill prepared for the fluvial hazards that come with river floods. It is time we stop seeing floods only as inundation. Predictions of inundation risk, and mitigating for inundation, cannot prepare towns or property owners sufficiently for problems like catastrophic streambank collapse, or inches to feet of deposited sediment. Some measures used to protect against inundation – like building berms and levees – can make fluvial hazards worse.
The long-term, cost-effective solution to reduce fluvial hazards and damage is to allow rivers room to move as much as possible – to flood their floodplains, and to meander and braid. Where this is not possible, it is important to mitigate, by allowing rivers to move in other locations.